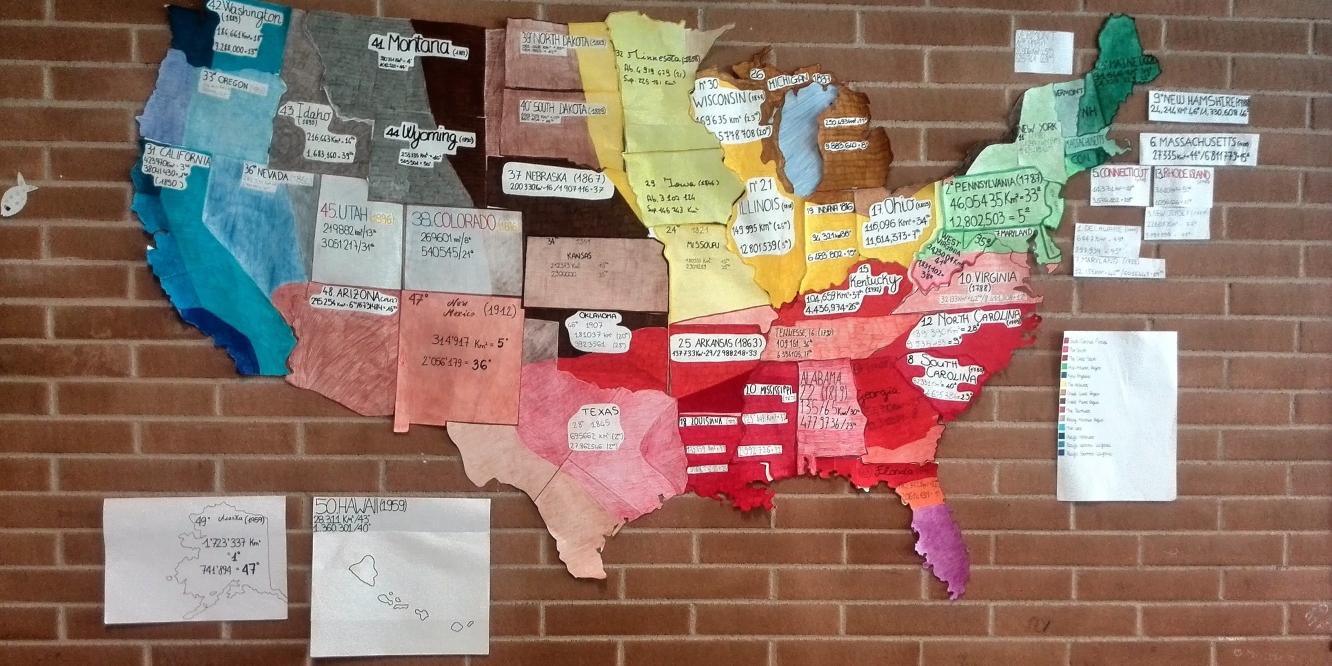 This is a map my first year students developed for an activity that included research on the fifty states of the U.S. regarding the geography, the history, the economy, population density and square miles/kilometers of each.

Each student had two states appointed and for each they researched on the above topics. The data they collected was then put together in a writing assignment that allowed them to acquire it in-depth and finally they presented it orally (no reading was allowed) to the rest of the class. Therefore, each one of them focussed on two states but  their research was shared with the rest of the class through which all of them have attained greater knowledge thanks to their team work that was also the result of personal effort.

The class work entailed mainly the research process, how to look up the correct information, which web sites to focus on, disregarding those that had, perhaps, too many details they didn’t really need and in the process they also learned how to summarize the information. The drawing of each state was also done in class in order to establish the same size for all and thus produce the map above that was then assembled to decorate their classroom.

They did excellent work at home showing their ability to work independently by following the directions given and they also showed great team work in class cooperating together every step of the way.

Moreover, I especially appreciated their enthusiasm along with the preciseness they showed in every part of their achievement, including Language proficiency which for a student of English as a Foreign Language means: pronunciation and intonation, grammar correctness, punctuation and syntax.

The project was welcomed by the whole class because we generally focus our studies on the UK and its literature and history, therefore studying somewhat in-depth some aspects of U.S. history and geography was for them an interesting opportunity.

Finally, the activity was successful undoubtedly because the students learned new skills, but even more so because they had the opportunity to test and assess them in front of the class with their oral presentations and, surely  for its tangible outcome as well, a colourful map that they all contributed making like a big jigsaw puzzle that is hanging on their classroom wall.

Two days later and, sadly, the map has disappeared into thin air!

What a shame and such a disappointment for the class, and for me too. No one can really figure out why, how; nevertheless it’s gone. Good thing I took pictures and wrote this post, at least some trace of it will remain in virtual reality, alas!

The photograps are mine.

3 Replies to “MAKING A MAP TO LEARN GEOGRAPHY AND HISTORY”